In honor of my writing friend, Michael Powelson.

In his novella “A River Runs through It,” Norman Maclean develops an unusual father-son relationship to examine the flawed nature of man in relationship to a theological philosophy of divine acceptance and unconditional love.

By developing his character Paul as a kind of prophet still trapped in sin, he suggest that man is both capable of identifying the path to redemption and simultaneously incapable of escaping death. By creating Paul’s life as an allegory to man’s relationship with God, he allows the reader to accept and understand seemingly unacceptable and incomprehensible levels of familial love for a difficult son.

Mclean uses the language of fly fishing to translate a Presbyterian family’s Biblical interpretation of this truth; his finest translation comes when the narrator’s younger brother Paul speaks words that reflect words from Genesis:

The Genesis connection is not immediately clear, but the narrator’s father’s affection for and belief in his son Paul is. The narrator’s father is a Presbyterian minister, and Paul is a trouble maker. Paul drinks too much and places too many bets and is often in trouble. Maclean uses the father-son connection to truth via fly fishing to examine the father’s enduring affection for Paul.

Toward the end of the story, after Paul’s demise has been suggested as inevitable but has not yet happened, the narrator asks his father about something he is reading. His father is reading the Bible and says:

“In the part I was reading it says the Word was in the beginning, and that’s right. I used to think water was first, but if you listen carefully you will hear that the words are underneath the water.”

The narrator tells his father that he (the father) is a preacher first and a fisherman second, and claims that Paul would say words are formed out of water. His father replies:

“No, you are not listening carefully. The water runs over the words. Paul will tell you the same thing.”

In the final few pages of the story after this exchange, the reader learns that Paul has been beaten to death, presumably as a result of the gambling debts he owes and is unable to pay. There is never a firm explanation of his death. The father is heartbroken, and continues to ask questions seeking more information about how and why Paul died, but little can comfort him. The narrator suggests that the terms of Paul’s death are less significant than the terms of his life.

“I’ve said I’ve told you all I know. If you push me far enough, all I know is that he was a fine fisherman.”

“You know more than that,” my father said. “He was beautiful.”

This exchange is explained as the last thing the two men ever say to each other about Paul’s death and suggests a larger redemption/forgiveness dynamic beyond the characters and into the limits of even divine love to understand and redeem human nature. That man may be a mystery to God is an atypical idea, but Maclean executes it brilliantly with his father/son/fishing allegory. 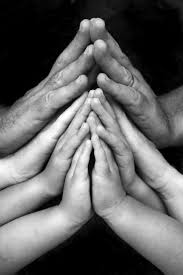 I don’t argue too much with Lamott. About anything.

It took a little child to show me, however, just how true the concept of simplicity in prayer can be. I was raised in the Presbyterian Church and had my child baptized there. While I grew up with many beautiful and meaningful family traditions around spiritual observance, I admit I have been less than focused on how I want those traditions to be passed on to my child. I knew I wanted to begin introducing her to the idea that she can talk with God, that building that relationship between her soul and something bigger than the meanness of this world is very important.

But like many in my generation, I can be a tad jaded. We’ve lived and worked in more than one community. We’ve seen in living color the downfalls and moral failings of “holy” institutions and church leaders. We’ve pondered the dark side of many things once taken for granted as the good. Simply put, we struggle with how to help our children embrace faith without blindly following the absolutely certain failures of humanity.

Can you see how hard I like to make things?

They really aren’t that hard. We need to do more to let our children lead us sometimes.

Sun, fish, sea, and self. The hands of God nurturing you through the basic elements of the world, if you will only let it happen.

You know, I should have probably said, “Help me” a little sooner. Today, I say, “Thank you.”

(This piece first appeared on January 16, 2013, on The Mommyhood, a blog of The Charleston Daily Mail.)