The big old wonderful house burned to the ground. Uncle Kin died while I was a student at West Virginia University, and Charlie died a few years later when I was in San Francisco being mistaken for what Time magazine designated as a “hippie.” I hitchhiked home from San Francisco via Canada and made it to Grandma’s one day after she spent her first night ever alone.

This was me shortly after hitchhiking home from San Francisco in 1971.

Grandma and I lived together for a year. She helped me tame my mule, taught me family history, gardening, and the names and uses of wild plants. By example she taught kindness. I gleaned all the family history I could. I put new tar paper on the leaking cupola roof and replaced the rotting boards in the hay loft and cleared out the decades of manure that was causing rot in the big foundation logs. During that one summer with Grandma, my girlfriend  raised hogs and two so-called hippies from Iowa raised an organic garden with 1500 tomato plants. A blight made sure we didn’t get rich on tomatoes.

Grandma died and I sobbed as I testified graveside that she was special, that without reservation she loved us all. She was our saint, our rock. Grandma Ethyl Atkins Barker and Uncle Kin Barker were saints who smiled into our lives. They both unconditionally loved us all, and for Grandma that even included one of our cousins who stole her pain pills. 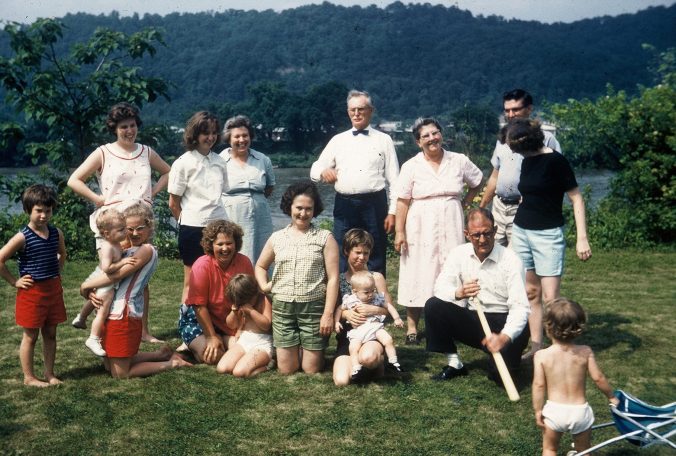 Some of Grandma and Charlie's progeny. Uncle Truman is in the back row beside Grandma who is beside Charlie. My mother is next to Charlie and Dad is holding the baseball bat. That is the Kanawha River in the background.

Uncle Truman in front of the barn, spoofing us, pretending to be a farmer.

Our home place is now under siege. Bull Creek is devoid of people, hardwood trees, ginseng, yellow root, and most other native plant and animal species. It is empty. The mountains above it have been strip mined along with my memories of Uncle Kin’s cabin and huckleberry picking. Ashford Ridge running from Ashford to Bull Creek has been scalped by mountain top removal strip mining. Behind our homeplace and just over the mountain on Fork Creek, mountain top removal strip mining is closing in on us.

A distant cousin sold the mountain across the river from our homeplace to a coal company. It is probably too much hope to expect that it won’t be destroyed like Ashford Ridge and Bull Creek.

When Truman and I are gone, I hope the heirs love the homeplace like we do and resist the coal companies when they come with offers of money in exchange for Grandma’s farm. I hope they follow the example of our progenitor Isaac Barker, who told the man buying up mineral rights on Coal River: “You are Skinner by name, and skinner by trade, but you will not skin old Isaac Barker.”

Isaac spoke truth to power and refused to sell his mineral rights.  My hope is that my stories and my family history will keep that truth-telling alive in future generations.

See A Better West Virginia for more on Blair Mountain and the history of coal mining and labor relations.

We moved to Detroit after Dad’s eye was put out in a coal mine accident.

In his new job, Dad cut deep into his thigh with a sander, and that sent us back to West Virginia. I did half a year of Kindergarten in Detroit, but when we got back to Emmons I started in mid-year of the first grade. My teacher, Mrs. Morris, lived on the next farm about a mile up Big Coal River. She came by on my first day and walked the mile with me to the Emmons Grade School.

After the first day I walked with Aunt Julia and Uncle Truman. Julia was in the sixth grade and Truman was in the fourth.

Lacking electricity like the rest of the area, our one-room Emmons Grade School was heated with coal in a pot-bellied stove, water came from a well, and there was an outside toilet. I was new and shy, which was not lost on at least one of the older boys. Out on the playground during recess, he said something to me, a word for female genitalia, in front of the other kids. I was embarrassed because I knew I was being made fun of, but I didn’t know what he was talking about.

Uncle Truman pulled me away from the embarrassment.

I was sent to the blackboard on the other side of the room where Aunt Julia was sitting—she whispered the answers that I was supposed to put on the board. I didn’t feel connected to the city children characters in our reading books. “Run Jim, run” and “See Jim run” didn’t inspire or connect with me. Jim and his sister Judy wore nice clothes and their parents were always dressed up. They were a bland family. Jim and Judy’s dad in a suit coming home from a day at the office looked nothing like my dad when he came home from a coal mine or a construction job.

I didn’t learn to read in the first grade and neither did the other two first graders. Not being able to read caused me lots of trouble when, a month into my second grade year, we moved to St. Albans. I was called on to read from the same book we had at Emmons. I remembered parts that Mrs. Morris had read to us and brazenly recited them as I pretended to read, but I was looking at the wrong page. My first and only F was in second grade reading.

It was a traumatic time.

My mother tried to teach me to read using a switch. It is hard to learn to read through tears, sobbing. I have enjoyed a lifetime of reading which is testimony that I survived the stresses of second grade. 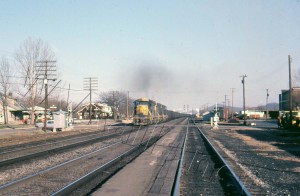 Somewhere between ages eight and ten, I started going to the farm by myself. I was never afraid on those solo bus and train trips from our home in St. Albans to the farm. It never occurred to me that there was any danger, and there wasn’t. I walked four blocks through Ordnance Park over to Route 60 and for a nickel and caught the Interurban bus to downtown St. Albans. I walked the few blocks from the bus station to the train station, bought a ticket and climbed on the train that went up Big Coal River.

Something akin to the theory of relativity fascinated me as I sat on the train before leaving the station. A train headed for Huntington sat beside my train that was headed in the opposite direction. One of the trains moved but for a moment I couldn’t tell which train it was. Did my train move or the other one? It was more magic. One of the trains stopped and a few seconds later the illusion was repeated.

“Do not flush while the train is in the station,” warned the sign above the commode. I found out why when I did flush—all of what I had just done went straight down onto the area between the tracks. It was fun to hold the flush handle down and watch the wooden ties and rock ballast fly by. After that discovery I paid closer attention to the space between the tracks whenever I walked there.

I was in a safe community cocoon. There were always other people waiting for the bus, and the kind train conductor knew Charlie and Grandma and made sure I got off at Gripp which is across the river from the farm. The conductor enjoyed calling Gripp “suitcase” to see if I would laugh. From the train at “suitcase” I walked on a winding path through a corn field to the river’s edge and yelled for someone to set me across the river.

Charlie often put me to work just as soon as I got out of the boat and to the top of the river bank. Once it was bugging potatoes. Truman and I made a game of it. We knocked the potato bugs into a can and turned leaves over to find their yellow egg clusters and squashed the eggs between two pieces of wood. At the end of bugging for the day, we took our catch to the house and put it in a metal pie plate on top of the hot cook stove. We watched the bugs dance and fry — we had no feelings for potato bugs.

Grandma and Charlie told me about the heroes of the coal mine wars. It was word-of- mouth history. I remember sitting at the dinner table and Charlie saying, “When they killed Sid Hatfield that was the last straw.” Grandma said that a woman they called “Mother” came to talk to the miners—she was speaking of Mother Jones, the famous labor organizer. United Mine Worker heroes Sid Hatfield, Bill Blizzard, Frank Keeney, Fred Mooney, Cesco Estep, Mother Jones and the Battle of Blair Mountain were never mentioned in my twelve years of West Virginia public school education.

Despite the fact that we are on opposite ends of politics and religion, Truman and I are still friends. He spends half of his time in Florida and the other half at the farm. It is great fun when we get together and reminisce.

(Editor’s note: Visit the Daily Kosand many other “Google-able” websites for more on Blair Mountain and its significance in the history of West Virginia and labor relations in the United States.)

“The Battle of Blair Mt. in Logan County was referred to as a civil war and depicted as fully 10,000 men – and some estimates to twice that number – were involved as the two armies began exchanging shots along a ten-mile front. George Washington had fewer soldiers at the Battle of Trenton, the engagement which changed the course of the American Revolution.

On Sept. 4, 1921, with more than 6,000 federal soldiers assisted by 20 airplanes ……the miners eventually surrendered when faced with the alternative of fighting against U.S. troops. Hundreds of men were indicted by a Logan County Grand Jury on charges of treason and murder.” (pp71-72, Don’t Buy Another Vote, I Won’t Pay for a Landslide, by Allen H. Loughry II)

More historic railroad images from St. Albans and other communities available at WVRails.net.