Home, if I had to choose one place, would be a tract of land, just north of Santa Fe on Highway 84. A few miles beyond Camel Rock runs the Pojoaque arroyo, soon after crossing the bridge, there on the left, on a hill, the adobe house. A long eastern wall of windows faces the Sangre de Cristo mountains; the western wall, the front porch, looks toward sandy barrancas that rise up five hundred feet above the spruce and sage brush. My grandparents lived in that house from the early eighties until my paternal grandfather’s death in 2000. We went there as often as we could. Maybe the landscape, so beautiful, so hard to live in, sank deep into our souls because its beauty, its harshness, are at once of this world and at the same time remind us that our time on earth is not for long.

The summer between my junior and senior year of college, I lived there. Having changed my major three or four times, I had, just that spring, finally declared English. I was lost. I went there to help my grandparents, to be their handyman and gardener – though I am neither. I went there because I had nowhere else to go and needed family. 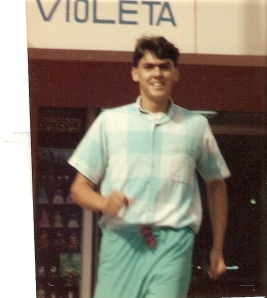 I didn’t go to high school, nor did I home school in the traditional sense. Instead, halfway through the tenth grade, I began to work as my Dad’s personal assistant – patient triage, pharmacy, running national and international errands for him. When I wasn’t working for Dad, I translated for work groups. On the side, I was to have kept up with my studies, reading an old college history textbook, working through geometry on my own. Instead, I spent that time reading Candide, Moby Dick, Catcher in the Rye, Huck Finn and studying German. After two and half years of this, any inkling of self-discipline was gone. Any facility with math sloughed off. Though we should’ve known my dream of becoming a doctor, like my father, was but a dream, I marched confidently into chemistry and calculus and embryology. Further complicating things, the summer after my sophomore year I’d decided that I couldn’t be a missionary for the church of Christ in Latin America, I didn’t see the point of trying to get people to switch to my brand of toothpaste in the hopes that with it their pearlies would be pearlier.

That summer I read Whitman, played bocce and drank beer with my grandfather, sat on the front porch and had conversations with my grandmother, dug fence posts, watered his pear trees, built a retaining wall, linseed oiled the wood on the adobe house, drove up to Chaco canyon to tour the ruins. I worked the land every day: hoeing, weeding, watering the trees. Both my grandfather and I ignored the hard fact that his pear orchard was a chimera. They never produced fruit; and, now, they are not there. But it was a lesson in tending a plot of land, in living in a place with a contentious history, in learning how to be both of these United States and something other.

After all, the First Peoples and the Hispanic of the southwest have been working out their relationship to the larger nation for centuries.

Many missionaries deal with culture shock by pining for the golden land of the mother country, dreaming of a place that no longer exists. It is a potent mix of nostalgia and present discontent. Back home everyone’s always on time. The lights never go out.  The water’s always potable and cold, straight from the faucet. The roads. The police. The cellophaned meats. Back home it’s not rice and beans every meal. Everything’s better and all the food you ever loved as a child is there.

When we lived in Nicaragua one of my Dad’s best friends was a salesman. I don’t remember if he sold meat before the ‘79 Revolution or if “the government” decided that his product would be meat. Because he refused to pledge allegiance to anything but Christ, he got poorer and poorer product. We hated his hot dogs. They tasted like rancid fat and sand. Dad, though, would buy them. We would spit them out.

He took us once for supper to The Purple Cow, a diner with coke floats and hot dogs. We were certain it wouldn’t have those nasty red sticks Omar peddled. This was a fancy place. We drank our floats and fidgeted about the booth, talking of nothing but hot dogs. They came. We sniffed. We whined, “Omar.” Eventually, Omar was given only bones to sell. Soon after we left Nicaragua, he found his way to Mexico, crossed the border into the U.S., and worked to bring his family north. Sometime in the mid “80s he was granted amnesty and residency.

Parental memories form so much of a missionary child’s sense of home. This inheritance of myth and nostalgia mixed with growing up in another country explains the dislocation of so many missionary children.

If Dad longed for anything, though, it was Italy. He didn’t share much with us, however. His mother died of cancer while he was in college. Childhood memories were hard. And, though his dad remarried, his mother wasn’t there to pass-on family history, to tell us stories of his childhood. When the family gathered, however, siblings would reminisce. Most had to do with “the family mission,” like how he, his siblings, and his cousins torched a roadside shrine in some northern Italian village, thinking they were advancing the cause of Christ.

Mom hardly ever spoke of her childhood. In part, I suspect this is because she too grew up out of place. Her mother, a Puerto Rican war bride, desperately tried and quite succeeded in raising her two children as anything but Puerto Rican. Dark-eyed, olive-skinned, and black-haired in Texas, she was terrified they might be taken as Mexican. Mom did tell us, though, that her own father had her trained to come on a whistle. And, once my wife and I had kids, she told me she was quite headstrong until three, when her father finally “beat it out of her.” At times I’ve wondered if this is why she doesn’t speak of her childhood. Then again, I’ve never asked.

As children we were not fed a diet of Halcyon days in the U.S.A. Our parents spoke of college in Texas and California and those first years of marriage in Italy. We, too, worked hard to keep our scraps of memory: prancing about a Milan apartment with underwear in our butt-cracks pretending we were Sumo wrestlers while Dad studied, the time it snowed and he made a sled out of cardboard and plastic trash bags and pulled us all the way home from preschool, walking down a street in Milan with Mom on a winter day looking for a lost car that had fallen through a hole in her coat pocket, a woolen rust and brown and beige plaid coat.

Furthermore, Mom had learned to cook in Italy. Home food was always homemade Italian. Also, she dutifully learned a repertoire of national dishes wherever we went. Thus, in Nicaragua our fare was Italian and Nicaraguan; in Costa Rica, Italian, Nicaraguan, and Costa Rican; in the Dominican Republic. Neither our food memories nor our deep family memories ever linked back to the U.S., unless it was a family reunion.

In which case, we were singing about heaven.

I’m around two and we are visiting London, it seems. I’ve always thought this was in Italy. But, the sign on the tower says, Bloody Tower.