Lisa Minney blogs about her life in Stumptown, West Virginia, at lhayesminney.net. She is the publisher of Two-Lane Livin’ Magazine, available in 16 central counties of West Virginia in print, and online at www.twolanelivin.com.  She is the first writer contributing to the Essays on a West Virginia Childhood project.

Here Lisa tells a simple story of a grandfather’s love, expressed in that unique way only grandparents can provide.  I know you will enjoy reading as much as I did how her grandfather managed to protect and teach his grandaughter, all the while setting the stage for both her blossoming independence and her life-long relationship with him.

In a dark, damp corner of the cellar, there sits an old wooden stool.  Nothing ornate by any means, just four barn-slat legs supporting a flat seat.  In the center of the seat is a roughly cut oblong hole, which conveniently serves as a carrying handle.  The stool has surely seen better days, and although one could never tell by looking, it has seen at least three coats of fresh paint. It has also come very close to the burn pile at least twice. But, I could never, would never, part with that stool. It is rough and ugly, but is still sturdy and practical. And I still remember the day it was made, the day it became mine. 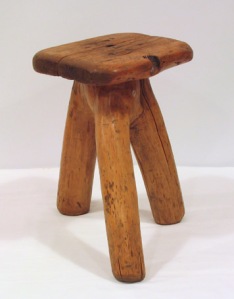 A summer day when I was eight years old.

Summers of my youth were spent at Mac’s Blue Haven, a summer reprieve nestled in the valley of Blue, West Virginia in Tyler County.  Two cabins sat on high ground above the juncture of Blue Creek (a mere trickle) and Middle Island Creek, what seemed as wide as a river to me. Mac was my Grandpa, a McDermott.

Grandpa and Daddy spent most of their time at the Haven mowing fields or weeding and tilling the garden, while Grandma and Mother spent time in the kitchen or front porch talking and stringing beans.  I was left to amuse myself with games, toys, bugs, whatever — as long as I did not wander, unsupervised, near the water.

The day Grandpa made that old fishing stool, I was on the bank of Middle Creek, unsupervised, fishing; my wormless hook on the creek bottom, no more than a foot from the water’s edge. I had taken the pole from the shed when no one was looking, and went fishing, without asking.

With the seat of my hand-me-down cutoffs planted firmly in the sandy mud, I listened to the water trickle and tumble over the rapids, and waited for a big fish to tug my line.  I wanted so much to catch a big fish to show my family. That would prove to them that I was big enough to fish alone. I would take my big fish and show them.  Mother and Daddy would see then.  Grandma would be more interested in the mud on my bottom, but Grandpa would hold my fish up high in the air, tell me what kind of fish it was, measure it, weigh it, then clean it for dinner.  We would eat my big fish, maybe even I would get to eat at the adult’s table, with the adults who were eating my fish.

Grandpa was the best at everything.  He had the biggest strawberry patch, and let me ride with him on the tractor sometimes.  He knew how to make a corn cob pipe, and could make the funniest faces.  And, Grandpa could catch the biggest fish in the creek.

I caught a glimpse of movement, behind me at the top of the bank, and there came Grandpa himself carrying something square and bulky.  I thought I might be in trouble at first, but when Grandpa joined me at the bottom, he made my favorite funny face.  Then, he set the wood box down on the ground and pointed at it.  I could see then that it wasn’t a box, but a stool.  So, I got up and sat on it.

The feel and height of the stool were perfect for me.  My feet even touched the ground! I knew instantly Grandpa made the stool just for me.  I looked at him and smiled, but he was eying by bobber in the water, floating cock-eyed the way they do when the hook is on the bottom.

“Mmmm. Catchin’ anything?” he asked.

Then I told him about the big fish I was going to catch to show everyone and prove I was big enough to go fishing alone.

Grandpa nodded, still looking at the lopsided bobber. “Maybe you should cast your line out a little farther in the water.”

I nodded back, inwardly pleased that Grandpa was going to help me catch the big fish, but outwardly acting like I knew that already. I quickly reeled the line in.  When Grandpa saw my baitless hook, he chuckled.

He took out his pocket knife and dug around in the bank, where the soft creek silt met the grasses of the field above. Soon enough, he had a fat worm, which he cut in half.  I watched him lace half onto my hook with practiced fingers, then wipe his knife clean in the grass.  He put the knife in his pants pocket, and dropped the remaining half of the worm in his shirt pocket.

I was entranced, both by the slime oozing out of the worm on my hook, and by the small, writhing movement in Grandpa’s pocket.  Grandpa noted the dumbfounded look on my face, but remained serious.

“Now, cast that worm way out there!”

I did my best to recreate the grand sweeping motions I had seen him make when he was casting.  In the end, Grandpa and I stood watching the worm, hook and line spin in tangled circles around the tip of my bouncing pole.

Then he stepped behind me, and squatting down, put his arms around my tiny frame, and his massive hands on mine.

“Push and hold the button,” he said, pressing my thumb on the button. “Twist back,” (turning my frame back slowly to the left) “give it gumption,” (a slow twist forward) “aim” (now pointing over the water) “and let go of the button.” At that, the worm-weighted hook slowly descended as if riding a down elevator to the water’s edge.

As I reeled in the elevator, Grandpa stood up and got way out of the way.  When I was ready, he nodded, and I cast.

“Whirrrr – plop!” Right in the middle of the creek.

Grandpa leaned back on the bank, and sat with me in silence, waiting for the big fish to come along and raise me to the ranks of the independent fishermen. I liked sitting quietly with Grandpa like that – it made me feel my thoughts were bigger, more important.

“Grandpa,” I said. “Thanks for making me a fishing stool.”

He nodded.  “A fishing stool will make it easier to sneak back from fishing,” he said, and winked. “You don’t get a muddy bottom.”

I smiled at this big thought, and looked at Grandpa, sitting in the mud.  “Maybe,” I said thinking, “Grandpa, maybe you could make yourself a fishing stool and sneak off with me next time, in case I don’t catch the big fish today!”

“I’d like that,” he said, “but I can’t just sneak off whenever like you can.  I have work in the garden I’ve got to do.”

I thought big thoughts for a moment.  “Well, I suppose I could wait to sneak off until you’re done working….”

“You’d do that?” he smiled. “You wait for me before you snuck off again?”

Grandpa nodded.  “I’d like that just fine,” he said smiling. “Now be quiet, or you’ll scare the fish.”

We sat together on the shady bank of Middle Island Creek, and thought important thoughts in our silence – both of us absent-mindedly staring at the bobber in the water.  Slowly, I began to reel it in.

Grandpa looked up from his thoughts. “Don’t you want to catch the big fish to show everyone?”

“Nah,” I said.  “We can catch that fish tomorrow when we sneak off together.”

Grandpa nodded and picked up my stool. “I guess I need to make myself a fishin’ stool.”

He took the remaining worm-half from his shirt pocked and tossed in the water, then began wiping the seat of his pants.  “Now, wipe off your bottom.  Maybe Grandma won’t notice the mud.”

3 thoughts on “The Fishing Stool”