Don’t overthink it – quick, what do Charlie Brown’s teacher, The Graduate, and Heavenly Creatures have in common? 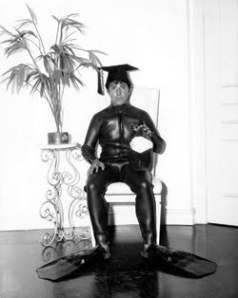 Remember? It felt about as comfortable as this.

I bet you know in your gut, but if you’re like me you prefer not to think about it.  They are all connected because they portray — sometimes frighteningly and sometimes humorously — what it looks like and sounds like when young people don’t really see anyone older than themselves as real.

I first started thinking about this in an ongoing way after seeing Heavenly Creatures.  I was an adolescent girl once upon a time, and it was quite disturbing to evaluate my comprehension of what happened to the girls in the film.  In short, they become obsessed with one another and the world they create for themselves, and when their parents develop concern that their connection is unhealthy and try to separate them, one of the girls kills the other one’s mother.  The film is based on a true story.

As with any shocking tale, there were a lot of water cooler conversations about, “Can you believe that happened?”  But there were also a lot of private conversations between women who trusted each other about how, yes, they could believe it happened.  It opened up a whole dialogue about the dangerous capacity of adolescents to disconnect from adults, not just by going to their rooms and turning up the music, but by completely discounting the humanity and “realness” of those adults.

I had a lot of conversations with friends from my youth about our perceptions of the adults around us.  Unlike the movie – thank God – there was never any serious animosity toward anyone.  But there was this shared sense of not perceiving our parents and their friends as really inhabiting our world.  They were like satellites orbiting around us, and while we acknowledged them, accepted their offers of food and a ride to the mall, we didn’t really connect with them at all as truly part of our reality.

It’s very weird to reflect on that psychological place.  But you can experience it as an observer any time you are in a crowd of kids.  Notice how they make eye contact only with each other, how they seem to hear only each other, how you could swear if you didn’t make a fuss about it they would trample you flat as they walk in a group down the street……….

I love young people.  Remembering how I perceived the world then helps me not go bananas when they seem to not even see me, because in truth, they don’t.  And it’s not exactly a picnic for them either.  I think it just means we have to try harder to reach them on their terms, and to remember that we were young once too.