This is the conclusion of a 5 part essay for the Essays on a WV Childhood project.  To go to the beginning of the essay and start with part 1, click here.

Growing Up Blind (part 5, After College)

Ironically, so many Christians befriending me in spite of my struggles had an effect they didn’t anticipate.  I felt intense guilt for being attracted to other men, but I was greatly encouraged that there were people who knew the ugly truth about me and still chose to be my friend.  There was a part of me that began to think, “Hey, if these people will still be my friend, then maybe this is not such a horrible thing after all.”

In the years after I graduated from college there were many times I felt that I had to choose between my faith and my sexuality, and for many years I chose Christianity. The prolonged conflict between these aspects of my personality, however, took its toll.  At the age of 32 I took a job in a new city and took the next seven years off from church.

Today, I describe myself as an agnostic.  My beliefs have changed, and I am no longer convinced that it is a sin to act on my sexual desires.  I am now 42 years old and for the first time in my life I am ready to date someone of the same gender.

Whatever happens, you can be sure I’ll record every major development in my journal. 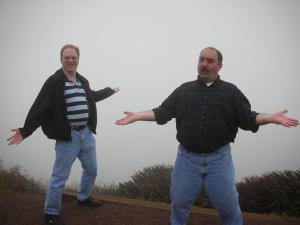 10 thoughts on “Growing Up Blind – John Warren (part 5, After College)”