I plan to spend a decent amount of time in the coming weeks exploring concepts of health, the body, perceptions of morality and spirituality, and why it seems so many health behaviors are interpreted as having moral relevance.  One of my jumping off places will be re-reading Flannery O’Connor’s short story, A Temple of the Holy Ghost.

In the process of hunkering down, I found this marvelous story about Ms. O’Connor as a child:

O’Connor described herself as a “pigeon-toed child with a receding chin and a you-leave-me-alone-or-I’ll-bite-you complex.”  When O’Connor was six, she taught a chicken to walk backwards, and this led to her first experience of being a celebrity. The Pathé News people filmed “Little Mary O’Connor” with her trained chicken, and showed the film around the country. She said, “When I was six I had a chicken that walked backward and was in the Pathe News. I was in it too with the chicken. I was just there to assist the chicken but it was the high point in my life. Everything since has been anticlimax.” 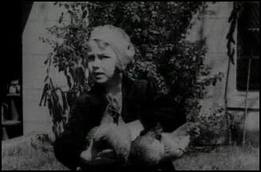 I am now entirely distracted from my original purpose, and ready to read and re-read everything this woman ever wrote!  I am missing The South today, and thinking of the way it has birthed and continues to nurture great writers — human beings with a sense of place and a connection to either the grotesque or realism, depending on your point of view.  As O’Connor said, “anything that comes out of the South is going to be called grotesque by the northern reader, unless it is grotesque, in which case it is going to be called realistic.”

I didn’t have the life experience to grasp Flannery O 20 years ago.  I think I’m ready.

— from A Temple of the Holy Ghost by Flannery O’Connor

Image credit: Amazon (this was the cover on my college textbook); An enormous shout-out to Miscellaneous Accumulation for finding and posting the Pathe News clip of O’Connor and her chicken!

4 thoughts on “Of Temples and Chickens”