“You can’t go on feeling sad without first consenting to stand in the ashes of some past event and then rubbing the memory of it all over yourself.” – Guy Finley

Mr. Finley sounds like a nice man.  His website suggests he is very successful in his chosen field of helping people “self-realize” and “find the direct path to an enlightened life.”

I’m also pretty sure Shakespeare would not have given him the time of day.  And Finley might say that is fine.

Sometimes one has to defend a tradition of excellence in one field by pointing out the potential threats of another.  This post is a brief defense of literature against today’s obsession with feeling good, being positive, and not engaging “the past.”

This is one of the first images I found for “ashes” – it’s not literal here, but so beautiful it feels right for this post.

I want to be perfectly clear that I admire the decision to break free from the unhealthy habits and ways of thinking that keep people stuck in a negative place, particularly a place from their past that is fueled by some dysfunctional relationship or event.  There is not much worse than watching someone wallow around in bad Karma and toxic beliefs when you know they could find their way out with the guidance of someone like Mr. Finley.   But, but, but………..

………What jumped out at me when I read his quote on a friend’s Facebook wall was how beautiful the image is and how powerful from an artistic perspective — “Consenting to stand in the ashes of some past event and then rubbing the memory of it all over yourself.”

I write mostly reflective personal essays.  I’ve dabbled in humor and even a ghost story, but my launching place and motivation for writing is rooted in a desire to understand my personal narrative.  I think many people write for this reason, and even when the short story or novel or essay is not literally about the writer, some very good material is drawn from personal experience.  I’m a bit sad that we seem to be defining immersion in struggle and vulnerability to grief as a character flaw.

Consider The Year of Magical Thinking by Joan Didion.  Recounting the year after her husband’s death by cardiac arrest, the author is a portrait of standing in the ashes, covering herself in them in an attempt to understand the loss of her best friend and life partner:

The narrative structure of the book follows Didion’s re-living and re-analysis of her husband’s death throughout the year following it, in addition to caring for Quintana (her ill daughter). With each replay of the event, the focus on certain emotional and physical aspects of the experience shifts. Didion also incorporates medical and psychological research on grief and illness into the book.

I carry in my head some lines about grief from Didion’s book.  Grief comes in waves.  Sometimes the waves slow in their crashing on your shore, but they do return and can be as powerful years later as they were upon the mournful event that precipitated them.

Grief is a force, there is no getting around that.  Grief is present in physical death, but also in the deaths of relationships, of opportunities, of a whole host of “ends” that it seems we often want to deny.

The truth is, and I won’t make a penny by telling you this, sometimes things are over, done and gone.

To embrace that they are over may mean standing in the ashes.  Sometimes the standing is not enough — you have to really get down and dirty and cover yourself with the evidence of the end.  I’m not sure it means you want to be sad forever, or that you are at some kind of fault for needing to grieve and to feel.  I think Finley implies a weakness in covering oneself with grief.  He might grow a bit on his self-realized path if he had tea with Joan Didion, and let her do some realizing with him.  There is no absence of strength in this woman.

My posts are slowed this month as I work with other writers who are developing Essays on Childhood.  I am drawn to headlines and references that speak to the personal narrative, and to the process of standing in the ashes.  Just this past weekend in my local paper there was a profile of Jane Congdon whose book, It Started With Dracula: The Count, My Mother and Me explores the author’s decades-long fascination with vampires.

Only on a trip to Romania, where the landscape of rivers and mountains triggered her childhood memories in Glen Ferris, West Virginia, did she make a life-changing connection to her mother’s alcoholism.

“All I wanted to do was see the land of Dracula and write about it, like a travel essay. I wasn’t going to write about my mother. I had opened my mind, and when I did, all those memories came back.

“I made the connection that some people are monsters. I couldn’t have told you why I liked Dracula, but the resemblance started to come to me — the mother with an unending thirst and a vampire with an unending thirst, and mountains and rivers. It just started to jell. It’s interesting how it started out to be a simple travel issue and turned out to be a parallel of my life with something I never connected to it. I loved Dracula, and all this was going on with Mom.”

You can write as an observer without being willing to embrace the human experience.  I think you can write excellent technical manuals, website content, textbooks or even some pieces of journalism.  But literature requires a process with levels of vulnerability and complexity that is different and often scorned, and we should support those who are willing to engage that process if we don’t want to lose an entire generation of readers and writers to self-help books.

The phoenix is a sacred creature in multiple cultures, but not yet in North America.  Maybe one day, it will be sacred here.

I hope it’s holding a pen. 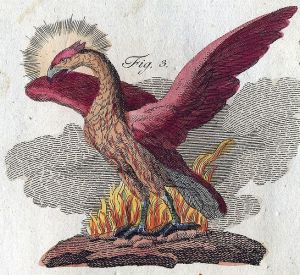 Most beings spring from other individuals; but there is a certain kind which reproduces itself. The Assyrians call it the Phoenix. It does not live on fruit or flowers, but on frankincense and odoriferous gums. When it has lived five hundred years, it builds itself a nest in the branches of an oak, or on the top of a palm tree. In this it collects cinnamon, and spikenard, and myrrh, and of these materials builds a pile on which it deposits itself, and dying, breathes out its last breath amidst odors. From the body of the parent bird, a young Phoenix issues forth, destined to live as long a life as its predecessor. When this has grown up and gained sufficient strength, it lifts its nest from the tree (its own cradle and its parent’s sepulchre), and carries it to the city of Heliopolis in Egypt, and deposits it in the temple of the Sun (from the Roman poet Ovid).

15 thoughts on “Ashes to Ashes, Pen to Paper: Embracing Grief for the Good of Your Writing”