This is one of my stranger late-night/half-asleep “visions” in some time.  (Visions sounds more profound than delusions.) 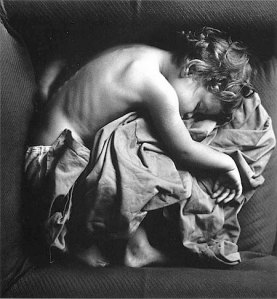 I woke up at 2:30 a.m. to hear my child crying in distress from her room.  I sprang from the bed to see what was the matter, a la ‘Twas the Night Before Christmas, and when I entered the room I found her completely turned around in her bed, with her little head at the foot board and her toes at the top.  Nearly unconscious herself, she was confused and scared and had no idea how to right herself.  Her eyes were closed the whole time.

While I worried that maybe she would be up for hours after this, all it took was me gently repositioning her and covering her up with her quilt.  She immediately snuggled back to sleep without a word, tears still bright on her cheeks.   Back where she belonged, all was right with the world in a matter of seconds.

So this event is not the weird part.

The weird part is as I staggered back to my own bed I suddenly had complete clarity that I should pray for the former Governor of California and his family.  But mostly for him as an individual.  In that wee hour of the morning, walking away from my confused child who was easily comforted, my brain went to one of the — allegedly — most invulnerable men in the world.

When I say pray for him, that was beyond my capacity.  It still is in the truest sense of the word pray.  But I did make an effort as I was falling back asleep to think kind thoughts about his suffering, and to wish him some telepathic comfort.

I seriously wonder sometimes how much we change from childhood to adulthood.  One of the reasons I created Essays on Childhood is I am convinced that so much of who we are and what we need as children stays with us in formative ways throughout our lives.

I’ve been negative on Arnold and his whole proverbial show for a long time; yet now I see him as a child who woke up upside down and had no idea what to do next.  This 10 year delay in telling his wife about his son with another woman is totally bizarre, unless you imagine a child’s mind that found itself somewhere it had no intention of going.  It’s like he was waiting this whole decade for someone else to turn him around.

Now I know, he is not a child.  He made conscious choices and a lot of people are paying an awful price.  The man is accountable.  He was not a sleeping kid.  I suppose it is possible that he is a horrible human being who is much more flawed than anyone else and that he deserves no empathy from anyone.  Believe me, I generally feel a lot of righteous anger when I rant about how disrespectful, narcissistic and unpleasant he is.  How he represents the qualities I find most retch-inducing in humanity and how if I have to see his jerko face one more time I’m going to scream.

I still sort of prayed for him.  For some strange reason, it felt right.

Image credit:  i am the closet geek

14 thoughts on “Waking Up, Upside Down: A Prayer of Sorts for the Big Guy”