There is a small grouping of Star Trek: The Next Generation episodes that lingers in my mind from the early 1990s.  One story was about Jean-Luc Picard living one of his many alternate lives on a planet with his wife and child.  The planet is under extreme stress, as the ozone layer is becoming thinner and thinner.  Everyone living on this planet wears long sleeves and pants, as well as sunscreen and hats at all times.  It is phenomenally hot, and much time is spent between Picard and his child working on coaxing life from crops they have planted.

The planet is on shut-down, but the change was so gradual that one gets the impression that generations of people have lived exactly the same way, unable to expose their bare skin to the sun and the outdoors.  Food supplies are entirely altered, and water, not oil, is the most valuable commodity.  One of the most striking things in the story is how extreme the environment seems, and yet how adapted to it the people are.  Suiting up to go outside at all times of day and in all seasons is just normal life to them. 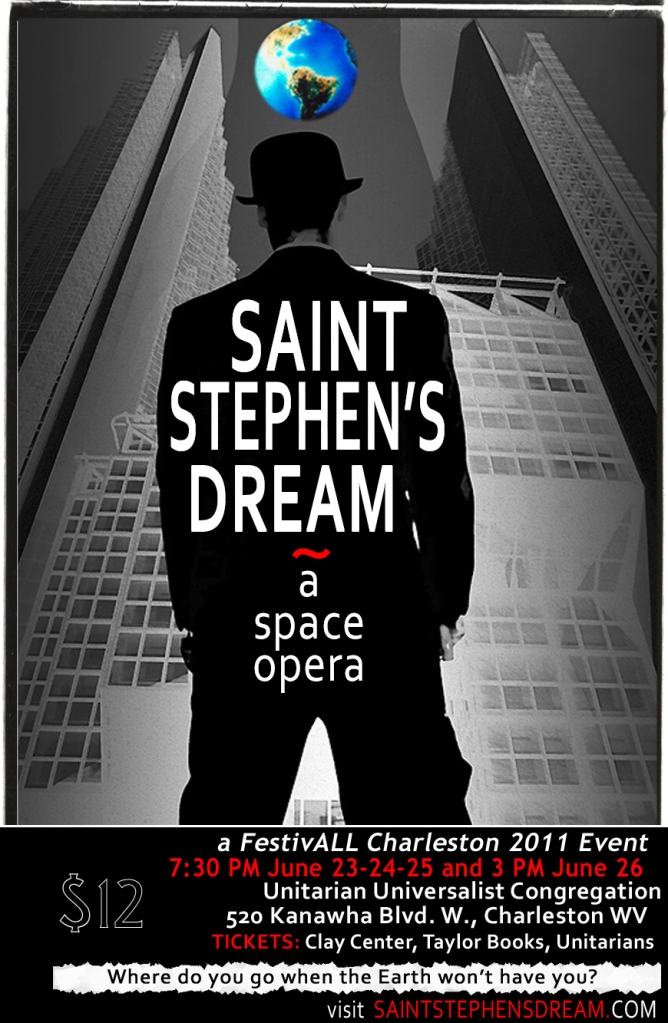 It broke my heart to see this episode 20 years ago, because I have always had the sense that the Star Trek franchise gets it right.  No, not everything of course, but there is a genius in the science fiction that predicted mobile phones and robots, new levels of travel to deep space, race and gender connections and disconnections, and the rise of artificial intelligence in our daily lives.

It’s one thing to look back and see that something was spot-on in hindsight, but quite another to see the future.

I don’t know what I will see for sure this weekend at Saint Stephen’s Dream, A Space Opera, but I am anticipating something rather amazing.  My new friend Doug Imbrogno is the kind of man to do something entirely new that smashes expectations and creates new cultural conversations and tools.

I’ll be at the Bloggerazzi table in Third Eye Caberet Saturday night.  No doubt, there will be an operatic follow-up post next week!

6 thoughts on “Where Do You Go When the Earth Won’t Have You?”