The young officer squinted with painful eyes into the unrelenting sunlight.  His partner hospitalized in critical condition, he felt strangely alone on the Thomas property, even though other officers and a team of forensic specialists were with him.

A drug addict had been arrested a mile from Ella’s shed. The dead woman’s blood was on his clothes, but given the episode’s violent nature he seemed oddly whole; no scratches, bites, or injuries were documented.

A female detective crossed the yard to approach the young detective.  They were longtime friends, and her speech was slow and careful when she spoke about the Sera Thomas case.  “So she never said goodbye to anyone in North Carolina?”

“That’s what all the interviews indicate,” sighed her colleague.  “Most say they just accepted it because it was so soon after everyone found out about her affair.  They thought she was ashamed, skipped town to save face.  The church people bought the shame thing, hook line and sinker.”

“In hindsight, sure,” said the young officer.  “At the time, the community thought it made sense.  Even his parents believed he killed himself.”

“What do you think?”

“I think he was forced off the bridge, I don’t think he jumped.  We may never know, though.  Sera is a different story, if we can just find her.”  He looked into the sun, even though it hurt.

The woman forced herself to ask the obvious but forbidding question.  “Do you have any idea where she is?  Any gut instinct?  I mean,” she drew a deep breath, “There is a lot of territory in question.  Thomas was good.  Everyone believed him about everything.  God.  Was she ever even in Mason County?”

His gaze fell on the Thomas flower garden.  Heavy rose blooms weighed down even the strongest stems as if they were marble spheres.  A honey bee lifted itself from a flower, its legs coated in nearly invisible pollen.   Carrying its fertile payload to another farm, the bee lifted itself out of sight.

Pulling his long-neglected sunglasses from his breast pocket, he gestured to another officer holding a shovel to go ahead and stepped into his car, careful to knock the soil off his soles. 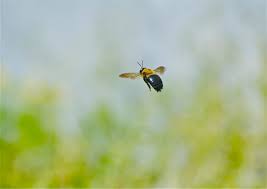 2 thoughts on “An Esse Diem Halloween Story (the conclusion)”