This is some of the most important writing advice you will read in your life. 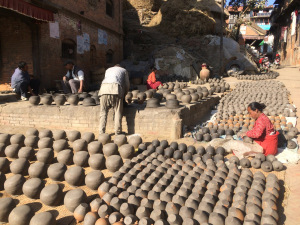 Bhaktopur, Nepal. All about quantity.

As writers, we edit our work. More than anyone else except, perhaps, oil painters, we labor over the fixed form until it’s “perfect.” Or as close as we can get it. Tweaking sentences and swapping out words. Junking the whole thing and starting again, treading the same path, but better. Until it wins approval, checks, awards, validation.

In their 2001 book Art and Fear, David Bayles and Ted Orland tell the parable of the pottery teacher:

The ceramics teacher announced on opening day that he was dividing the class into two groups. All those on the left side of the studio, he said, would be graded solely on the quantity of work they produced, all those on the right solely on its quality. His procedure was simple: on the final day of class he would bring in his bathroom scales and weigh…