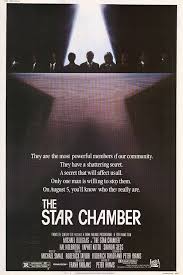 “Disgusted with criminals escaping the judicial system via technicalities, an idealistic young judge investigates an alternative method for punishing the guilty.” — IMDB, The Star Chamber, 1983

I saw The Star Chamber a long time ago, but the thing I remember most is being perfectly caught in the moral dilemma from the story’s first minutes. (Michael Douglas is above-average as usual; Hal Holbrook is amazing.)

Have we all not been there on some level?

You are doing what the system tells you is right. You follow the rules of the system, with the presumption that somewhere in all of your effort is justice. That outcome may not be obvious, but you just have to believe that following an agreed upon protocol is better than going rogue and making up your own rules.

If you are not familiar with The Star Chamber plot, you can read a good summary on Wikipedia. A young, idealistic judge who believes two child killers have been released on a legal technicality is recruited into a secret society of judges whose members order hits on criminals who “fall through the cracks” in the system. It is hard not to pull for this illegal but satisfying attempt to make bad men pay for their egregious crimes against humanity. You know from the beginning, however, that there is no way, no matter how much you want it to, that this can ever work.

It’s a classic tale of becoming the very thing you are trying to eradicate.

The writing is on the wall, but I still get drawn into this idea, the idea that we can fight a broken system by refusing to play by its rules. Beyond that refusal, we can create alternative systems that punish the corruption of the others. It all should work as long as no one screws up.

The thing I keep coming back to in these stories, the fictional ones and the ones I live in my own life, is the terrible mistake of believing that human beings can ever be part of something that isn’t flawed. It’s just the way we are. We want to be good, we want justice, we seek the right, but so often we are left bleeding from the shards of an imperfect world no matter how hard we try to fix things. It’s such an ancient understanding it fuels most creation myths, and yet somehow we struggle to accept what we know and have known since human beings started taking a look at ourselves.

There is no end to the debate over government vs. private business when it comes to which system offers the most ethical environment for decision-making. Government and public systems are fraught with rules and regs that often paralyze action and lead to limp results; by the time you schlog through all of the dos and do nots, you almost forget why you wanted to do anything in the first place. Private business can be efficient, but the efficiency can leave gaping holes in thoughtful processes, and cuts the time often needed to review a decision for consequences.

In The Star Chamber, a hit is ordered on presumed killers, only for the judges to learn the men were not in fact responsible for the death that prompted the order. That’s not a problem, they reason. We know they are bad men. They did something. If they are not to die for this crime, they surely deserve to die for other sins.

While my personal ethical lapses may seem minor compared to those in the movie, I know that they often trend around the same kind of thinking. This whole situation is wrong! It’s so messed up. Anything I do to fix some of this mess must be better than living with this broken situation.

Except it never, ever works that way. Ever. Not in the long run.

Prayers today for the family and friends of the slain U.S. Ambassador in Libya.

Prayers for my friend who is in the middle of an election year mess at work.

Prayers for my country as we continue to grieve and seek justice over a decade after the terrorist attacks.

Just….prayers for all of us.

(You can view one of the better movie clips available online here: http://www.artistdirect.com/video/star-chamber/55261)

Harrison Ford’s Witness is one of my all time favorite films. The Wiki entry includes these lines:

Roger Ebert of the Chicago Sun-Times rated the film four out of four stars, calling it “first of all, an electrifying and poignant love story. Then it is a movie about the choices we make in life and the choices that other people make for us. Only then is it a thriller—one that Alfred Hitchcock would have been proud to make.” He concluded, “We have lately been getting so many pallid, bloodless little movies—mostly recycled teenage exploitation films made by ambitious young stylists without a thought in their heads—that Witness arrives like a fresh new day. It is a movie about adults, whose lives have dignity and whose choices matter to them. And it is also one hell of a thriller.”

I’ve never been able to shake some scenes, and the clip above is one particular sticky example. It replays in my mind often, and lately every day.

Some critics dismiss Witness as “just another cop movie.” Others praise it for being “devoid of easy moralizing.”

This Sunday morning I am asking myself, what does my country want to be? Is the 21st Century U.S.A.  just another cop movie? Or will we be willing to go deeper?

Wishing you a day of peace and reflection.