Being the youngest of four and the only girl, Lewisburg helped open my eyes up to the kind of family that we were.  We moved around a lot.  We lived life with great enthusiasm.  We took it all in.  We were not the “armchair” Smiths.

My Uncle Bill would drive with his two young children over from Charleston on most weekends to stay in his log cabin in the woods. He built this cabin single handedly and with great pride (this fact was listed in his obituary many years later).  It had, and still does have, an outhouse and no running water.  My cousins Margie and Will would stay in their zip up pajamas all weekend.  They lived and enjoyed the simple things in life.  (By the way, I was devastated when this man we so lovingly called “Uncle Bill” died.  He was a special force, a gentle giant, a kind soul that you dreaded to see leave this world.  We all miss him to pieces.  He was one of a kind.)

My other uncle once drove to Lewisburg for Thanksgiving (for one night) with his four young kids from Jacksonville, Florida.  They made the long, thirteen-hour drive in their two-door white 1970’s Cadillac Eldorado.  This was the first time my cousin, Curly Caroline, ever saw snow.  She and I were both in the 3rd grade.

These are our people…living life fully – driving from Florida for a family meal and keeping your onesies on.  Living life to the fullest, taking it all in.  I try to practice this today.

My dad’s passion for Lewisburg spilled over onto his children.  He always talked about this “sacred land” and, being of the Scotch-Irish descent, how the “land was the soul of the man.”  Mowing grass on my granddad’s red 1948 International tractor was his peaceful infatuation.

If we weren’t there to stay, then we were en route to and from that place that we loved so much. We were always on the run, going to football games in the fall, lacrosse games in the spring, and wrestling matches in between.  It was almost like we lived and traveled with Lewisburg constantly on our radar screen. It was our hub.  We came and went so often, and I’m so glad we did!

“I’d rather be in Greenbrier County” – that was our family motto.

With four kids, there was always some kind of chaos taking place.  Disorder was the normal way of life.

My parents hosted many gatherings in Lewisburg.  Lots of Bloody Marys and bluegrass music. I remember one particular party when my brother Lyle showed up with smut on is face… “Would you tell my mom I need her…my motorcycle just blew up!”  I will never forget the look on that lady’s face. 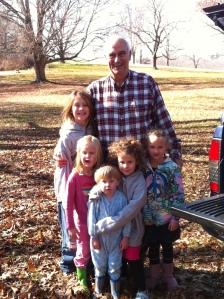 The writer's father with 5 of his 10 grandchildren, Thanksgiving 2011 at Smithover

When I was about five, we arrived to Lewisburg late one night following a Virginia college basketball game with some close family friends whose oldest son was playing. We pulled into our dark driveway after the long travel.  Our woody station wagon was full with two sets of parents, two of my brothers, two of our friends’ sons, and the only girl (me) sat up front between my mom and dad.  We were all talking about where we were going to sleep…”I want the top bunk”…”I get the couch.”  “I get the comfortable bed.”  All the boys declared their sleeping location.  My dad, being protective, grumbles loudly…”Lisa, you sleep with me and your Mama!”  I proclaimed confidently that he did not have to worry…that I was a lesbian!  Our friends like to bring it up often with a laugh, and I am proud of my quick thinking strategy at five years old.  It worked.  I got the bottom bunk that I loved so much.

Some other specific memories:  rustling in the leaves in the fall, riding motorcycles, sled riding, bluegrass music, and “clearing land” at Thanksgiving, driving up for the new oasis on Snowshoe Mountain.  (My mom still has her awesome full body ski suit.) Our dog Muskin running into the woods as soon as we arrived…often not coming back for hours, but always returning with the strong smell of spring woods or the pungent stink of going into battle with a skunk (still today, that smell evokes wonderful memories of my childhood in Greenbrier County).

Chaos is not uncommon in a big family.  During a televised football game at one of the many Thanksgiving holidays we spent at Smithover, my older brother surprised us all during the half time show.  He pulled out his shotgun (safely, but without warning) and struck a buck from our back deck, out of nowhere.  The younger kids jumped for joy.  Once the gun was locked away, they ran to inspect the kill.  It was not a customary family event. One of my cousins left with her young child and did not return on that trip.  But she did eventually return.  Your family can really turn you off…but it always amazes me how you come back home for the holidays.  That is the beauty of family.  They say you can’t pick your family….but I sure would pick mine if I had the chance.

Tomorrow:  For the Love of Food

(Read yesterday’s post for Lisa’s introductory writing, For the Love of Lewisburg.)

For the Love of Natural Beauty

Lewisburg and Smithover are where I developed my powerful inner connection with beautiful and unique outdoor environments.  Imagine lush green, gently rolling land with karst topography and an awe-inspiring view of the Allegheny Mountains and White Sulphur gap.

This was our television, our big screen TV, our childhood backdrop. 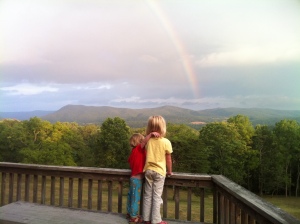 The writer's children at Smithover

The woods and open fields, as well as the nearby Greenbrier River, were my playgrounds.  They helped mold me into a lover of the great outdoors, into someone who embraces each of the four seasons with vigor, someone who appreciates the raw beauty of sunsets and clear starry nights, all of which I carry with me today as a mother of two little people.

I had a passion for the woods.  In Robert Frost’s poem “The Road Not Taken,” the two paths that diverged in the woods, in my mind, have always been the two “roads” that lead from our open field into the woods and property of my Dad’s brothers, Chris and Bill.  When you stood at the divergence, one was well-traveled and the shortest distance to the cabin in the woods.  The other was “grassy and wanted wear.”  You could look down one and see “where it bent in the undergrowth.”

Both are lovely, but the one less traveled provides a lengthier and meditative stroll.

The open fields are peppered with giant oak, maple and elm trees.  When I was a child, the trees looked like giants waving down at me with their many branches.  Sometimes I would even pretend to shake one of their hands.  It reminds me of the endearing and imaginative children’s book, When Giants Come to Play, which portrays imaginary giant friends that play hide-and-seek, toss marbles, and drink tea with a young child.   The thing is, these trees are not imaginary.  You could actually hide in one of their pockets or pick flowers with them. My dad affixed wire, a tramway of sorts, between the Big Oak and the Old Elm.  It was like being gently tossed back and forth between two giant friends.

The Greenbrier River was our recreational oasis.  We swam and sunbathed at Cat Rock and conquered our fears jumping from Anvil Rock, which was shockingly high.  We mastered walking on slippery snail-laden river stone, porting canoes and fishing poles at places like Anthony Creek, Caldwell, and Ronceverte.  I learned early how to bait my own hook.

The river also served as a science laboratory.  We studied the physics of skipping rocks, the biology of crawdads, and the identity of mountain water lilies. We cautiously avoided water moccasins.

When the day slipped into night, something spiritual and magical took place. Sunsets transformed me.  They were my quiet obsession, and still are today.  I wanted to bottle up every moment when the sun went down and twilight appeared.  The air got lighter.  I carried the peace and tranquility of dusk into my dreams at night.  I would stare westward, surrounded by mountain air, and drink in the fiery colors of the setting sun over the open field. I continue to value and soak up this spiritual golden hour, and use it as a meditative tool or a moment to fall in love again with the astonishing beauty of life. 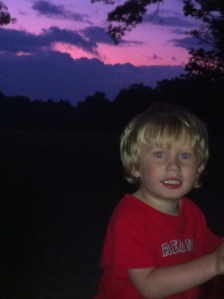 Nighttime at Smithover is exceptionally spectacular as well.  Stargazing on moonless nights is also transforming.  Walking through the wet grass at night, you might think darkness is eating you whole, until you look up.  The heavens glow. Your giant friends might wave down at you again with a star dazzled backdrop….and all the stress and anxiety of life just melts away.

You feel closer to God in the country; where the air is fresh, the sunsets are miraculous and the stars…oh man…the stars on a clear cool night…they are stunning!  This is why we called it “God’s Country” growing up.

Tomorrow:  For the Love of Family