The concept of evil is so ancient, vast, and complex that even though I think about it often I hesitate to write about it.  A story on NPR yesterday made me change my mind.

Consider this (emphasis added is mine):

Inspired by the structure of Dante’s circles of hell, Michael Stone has created his own 22-point “Gradations of Evil” scale, made up of murderers in the 20th century. “I thought it would be an interesting thing to do,” he says. 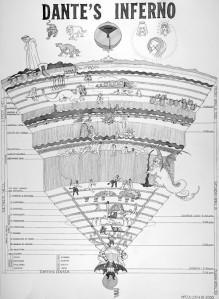 His scale is loosely divided into three tiers. First are impulsive evil-doers: driven to a single act of murder in a moment of rage or jealousy. Next are people who lack extreme psychopathic features, but may be psychotic — that is, clinically delusional or out of touch with reality. Last are the profoundly psychopathic, or “those who possess superficial charm, glib speech, grandiosity, but most importantly cunning and manipulativeness,” Stone says. “They have no remorse for what they’ve done to other people.”

Stone hopes the scale could someday be used in prosecutions. “The people at the very end of the scale have certain things about their childhood backgrounds that are different,” he says, from those who appear earlier in the scale.

That a modern-day psychology/medical professional would use Dante to consider how to interpret and respond to criminal activity fascinates me.  I have a foundation of respect for things that are ancient and complex, and genuinely believe that no matter how “evolved” we become as a species we may never be able to get any closer to the Truth of some things than we did hundreds of years ago.  In fact, I often think we lose knowledge by insisting that something explained by older civilizations must need polish and improvement.  If it’s old-school, primitive hindbrain stuff, maybe not.  Avarice, gluttony, wrath, betrayal, etc. seem resistant to “evolving” out of human nature.

But how we interpret and label our condition is important.  How we position the concept of “evil” in the world is crucial to how we respond to it.  My life changed the day I internalized the concept, “We are not punished for sin, but by sin.”  Naturally the human justice system can only focus on punishment for, but the larger idea of why we suffer is directed by the idea that following certain inclinations rather than resisting them inevitably will lead to a bad situation.  It’s as guaranteed as basic addition.

When we label people themselves as evil, we are taking the easy way out.  If anything, Michael Stone’s analysis of the 22 murderous types indicates that the more abuse and trauma an individual as suffered, especially early in life, the more prone they are to a psychotic break that disconnects them from a capacity to participate in anything but increasingly violent and disturbing behavior.  There is clearly a stress point for the mind, and the scale suggests that it’s the passing of that point that creates an inability to ever go back.

Which brings us full circle (pardon the pun) to Dante.

Reading Stone’s profiles of murderous behavior and its origins supports Dante’s story.  What we call “evil” is a concentric, spiralling energy that with each pass pulls one deeper into a level more difficult to escape.  Properly managed, this connection of old and new thoughts on the influence of evil on our lives has the potential to reinvigorate public interest in prevention of and intervention in abusive environments, especially for the very young.

It also reminds me that, past a certain point, there are still limits on what people can fix.  That doesn’t mean it can never be repaired.  See Dante.