I just read a great essay in The New York Observer (via West Virginia’s own Ann Magnuson).  If someone asked you for a quick answer to this question, what would you say:

“What’s so great about being original?”

The essay’s author Lee Siegel stumbled a moment and then started thinking: 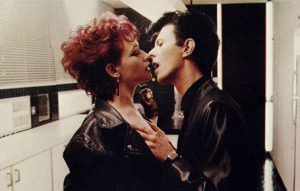 We are now in the middle of a crisis of originality, and partly this is due to the raging dogs of information that Google has unleashed. (EDG note to self: raging dogs of information.  That is some good stuff.  I need to use that in my next blog post.  Wait, I just did…….or does that count?)  We are so inundated by what has been written and said, and by what was written and said just seconds ago, that it is becoming impossible to sort out who said what first. Not only that, but as the idea of intellectual property—of copyright—has been thrown out the window, the notion that thoughts are duplicable commodities has become more widespread.  (EDG note to self:  I really, really want to use that picture of Ann making out with David Bowie from The Hunger.  That’s not copyrighted, right?  I mean, I couldn’t just get it if it were, right?)

I want to tell you that Lee’s analysis of the homogeneity of literary product as it becomes increasingly electronic versus unique in your hand as an actual book is brilliant.  Except he just said that…..I mean, you can read it in the link if you click it.  Let’s see……I also really liked his examination of how referring to all forms of knowledge now as generic “information” is corrupting and degrading our appreciation of original thought.  But he did mention that, too.  And you probably just read that.

I was going to post today about the word “unique,” and how if one more person uses a modifier with it I may go bona fide crazy.  There should be a special reform school (prison may be too harsh) for those who say, “most unique,” “more unique,” etc.  But Lee knocked me off my game with his ideas.

Oh yes.  I think what I really want to tell you is that I completely adore his concluding thought:

But no one is quite like anyone else, and so long as you are honest about your experience, no two people will ever make intellectual or artistic sense of the world in the same way.

I was going to say something like that.  I swear.