From June 2008, this is dedicated to Chris Paradise, aquatic ecologist, writing coach, fellow parent of a young child, and cherished friend.  I wrote this essay at the Lilly Seminar for Davidson College Alumni, “This I Believe: Exploring the Meaning of Life.”  Chris will forever be in my heart for his role in bringing this out of me.   It was a long time coming.  Thank you!

I believe in getting the tattoo.

In the summer of 2007 I had already wanted my tattoo for four years.  I could close my eyes and imagine it a part of me, but when I tried too hard to see it, it would slip away into the underbrush like a deer who senses your gaze.  It was a long period of meditation and patient waiting.

I needed permanent representation of bringing my heart and mind to peace with nearly ten consecutive, tumultuous years involving chronic disease, professional struggle, marital crisis, and infertility.  Enough was enough, and my soul hungered for a ritual to mark my moving forward.   When the voice of the universe whispered repeatedly the answer was a Eurasian practice of permanent decorative skin marking from Neolithic times, I was stunned.  I expected something more like a new sports car. 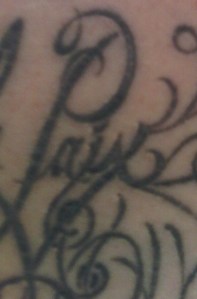 la Paix is French for "peace"

That summer, I planned a weekend getaway with girlfriends from Davidson College, and the time was right to push this vision toward reality.  One of my friends  was hosting the group in her hometown.  “Where’s the best place to get a tattoo?” I asked.  Without hesitation she told me, and I felt  my feet hit the first firm steps on the path to my Holy Grail.    I emailed with the shop’s owner and described the elements I wanted:  the French word for peace in a feminine script, very small and discreetly placed.  After several back and forths in writing, the next step was simply to meet in person and do the deed.

Upon my arrival, the artist showed me his design, and it literally took my breath away.  It included not only my original elements, but a dove and a stylized peace sign.  It was much larger than I expected, but I knew immediately it was mine.  With no hesitation, I said, “Let’s do it.”  Four hours of cathartic pain later, I emerged from the shop in my new skin, not so much a different person as the old reborn.

What did I experience through this mysterious process?  Contemplation, patience, individualism, connection, intimacy, trust, support, privacy, freedom, release, self-expression.  What do I carry with me every day as a result?  The same.

My tattoo is not a part of me, but one with me.  From the first moment I saw it embedded in my skin, it was not something new, but something the hot needles had scratched away skin to reveal rather than add.  I smile now when I think about my original fears, especially the fear that I may have set a bad example for my child, who is due next month.  Everyone says that tattoos should not be taken lightly, because they are forever.  I agree they should not be taken lightly, but they are most assuredly not forever.  This body had a beginning, and it has an end.  What will last longer is my story, and for her entire life my daughter will be able to say of her mother, “She got the tattoo.”

6 thoughts on “This I Believe: I Believe in Getting the Tattoo”