Our family collected songs about heaven like some people collect teaspoons. They marked and measured moments in our lives, like the dirge we learned around the time Mom went blind in one eye. 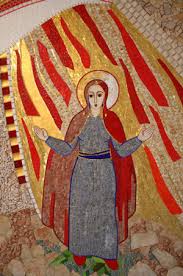 The world you know as a child is the one given you. You move because your parents move. You are from here or from there because your parents tell you so. You grow up in a religious group and are told it began on Pentecost Sunday and you believe this to the point of arguing in fifth grade with Catholics about primacy of origin, utterly ignorant that Campbell and Stone were 19th century Americans and that your particular religious group was born in the hills of Kentucky. Children live and move about in a world presided over by adults. The lucky ones never have to call into question that world, get to bounce about enveloped in love, oblivious to most anything but their wants. We were lucky and parental love covered over many sins.

I remember aspects about Mom’s blindness. How the morning she woke up and couldn’t see we were in a mountain village, several hours north of Managua. Dad had been holding a health clinic. We’d been sleeping in our Volkswagen camper. I remember our leaving Nicaragua, the time spent in Houston, the parents going to see specialists, the miracle of Mom’s sight regained. I think I remember their having talked about it that morning. I’m rather sure we headed back to the capital early. They probably talked about it all the way home and then long into the night and for many nights. But I don’t remember. Maybe they kept this from us. Maybe a mother touched by blindness was, for us children, inconceivable. As a child it’s hard to see beyond your own needs and desires.

Who can remember what street we were on? Dad was driving the Volkswagen they bought anticipating van-fulls of Nicaraguan brethren and sistren. And there always were. We often fulfilled Christ’s injunction to let the soldier ride along. But on this morning or afternoon, it was only us. Dad was recounting a nurse flirting with him. Only more. Even at seven I knew that overt and blatant propositions were improper. But I wasn’t worried. Mom and Dad were in their golden years and talk flowed between them like light. They trusted each other, were faithful to each other, and could talk about anything. This I do remember; but I don’t the worry about Mom’s blindness.

And yet, that song. One more step, one more step in faith, forward brother, forward, our prize waits for us in heaven. Like I said, a funeral march, each measure dragging like a tired foot up a hill. And mother, eyes closed, singing, One more step. Forward brother. There’s a prize.